Posted by Mick Jeffries at 3:05 PM No comments:

On the eve of a new year, on communication

"Oh she can speak alright … not English yet, but …"

I've said this many times, with boundless pride. My girl is a talker, there's no doubt. And I've enjoyed with equal boundlessness the odd fraternity of a constant companion who speaks another language, neither of you completely understanding the other.

My earliest experience of this was probably a family exchange program to Italy when I was about 11. The family we stayed with — an Italian businessman, his wife and their two kids — spoke no English and we spoke no Italian; yet we managed to get along in a cheery, if awkward manner. I remember that the mother and my mom both spoke broken Spanish, which simplified matters (although to me it was kind of mind-boggling for some reason).

I remember that — due to jet lag — I would wake up before anybody else, except the Italian mother. And I would wander my way downstairs to find her in the kitchen, and she would offer me coffee. I'd never had coffee and didn't find it appealing, but her version — rich and milky — was a treat. We'd share in this delight, a young American boy sitting on a stool at the kitchen counter of an Italian housewife; not speaking a word of the same language but finding ourselves quite content — morning comrades, of different ages, genders, languages.

Ever since Libby Lee started "talking," it's been like this. I can't think of any greater joy than the sound of stirring. For her, it's usually a mildly jarring squeal, as if she's been jolted back into "this world." The first line in one of my favorite chapters of fatherhood, which I get to read variations of, over and over.


Coming into her room, to find her standing proudly at the rail of her crib (also often dazed with receding slumber), waiting patiently for … engagement. First it's a meeting of the eyes, then often a broad grin, possibly followed by outstretched arms. "Pick me up, pick me up!" Sometimes it's enough for her to simply stand there and survey the room, while I open shades and doors. Lately, this is followed by a brief time where I whisk her out of the crib and lie down on the nearby couch, installing her in the crook of my arm, head resting on my shoulder. It's quiet here, for a few peaceful breathes… then she'll start craning her neck up to peek at me, grinning. And my heart explodes.

There's so much to be said by this little foreigner. There's lots of pointing, some of it almost ritualistic. "Nose. Eye. Hair. Ear." These were a liturgy after a bottle, before naptime. All carefully referred to by a tiny index finger touching Dad's face, almost solemnly. And then "Chair. Light. Door. Window." All studiously pointed out from the little foreigner on my lap. 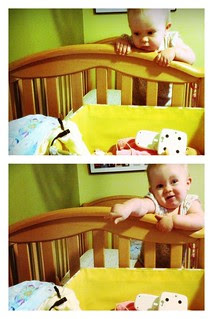 One of the earliest indications was towards any microphone I tried to place near her crib. Let me be clear: a tiny microphone. Always, it would be found out, with almost preternatural glee, she would intervene. No microphone was allowed to persist unmolested.

But the most entertaining by far has been the babble stage. I don't think it's even fair to call it that. Maybe The Bebop Stage, because some of her speeches, pronouncements, entendres have been so rhythmic, almost finger-popping.

Little humans. We feel like we're teaching them the language: "Chair. Light. Door. Window." But they're teaching themselves, I feel certain — maybe just to do the translation for the bibble-babble language that is so delightful to my ears.

I'm going to miss that language. I'm in no rush for her to speak English, and I don't so much try to teach her words as simply reply to her inquiries. She can keep inquiring as long as she likes, and I guess that's the biggest part of my job: to manage inquiries.

I guess it'll be more convenient for the whole household to speak English, but I hope it's as entertaining — as exhilarating — as it's been playing host to The Little Foreigner.
Posted by Mick Jeffries at 3:01 PM No comments:

It's Christmas, and we wake up to find Libby Lee has been replaced by an American Girl?! Not cool, Santa…

Posted by Mick Jeffries at 9:11 AM No comments:

Posted by Mick Jeffries at 4:08 PM No comments:

First Trip to the Library (Northside, if you're wondering)

Posted by Mick Jeffries at 11:35 PM No comments:

A Long Time Ago, Earlier Today at the Library

Posted by Mick Jeffries at 12:38 PM No comments:

Let's Go to the Library! (A First)

Posted by Mick Jeffries at 11:08 PM No comments: